It all starts with the fantasy. Male chastity is a powerful sexual fantasy for many men and fewer females…that’s usually usually because it’s a fantasy they can’t really understand

So it usually begins and grows inside the head of the male.

And that’s how it typically stays…. as a nice little fantasy which he keeps to himself.

Men initially make feeble attempts to convince and cajole their wives, girlfriends or lovers into helping them realize this fantasy of being sexually denied by a strong and powerful woman.

But once locked up in chastity for a few days, or maybe a week, the harsh reality hits the guy….right between the legs. They invariably begin to moan and complain that going without their beloved orgasm for even such a modest length of time, is a harder proposition than they thought.

And so the female is left rather confused,  since that’s exactly the situation he told her he wanted to be in.

The way it usually goes down is something like this….

The man broaches the subject of male chastity and orgasm denial by revealing his intense desires and willingness to turn his sexual fantasies into reality. The woman is first surprised, perhaps even shocked and sometimes simply disgusted by the whole idea.

In her world male chastity is not ‘normal’ behavior and her well conditioned mind screams out in defiance….

But after some thought, and a few more persuasive tactics from him, she agrees to acquiesce, put all of her preconceived notions about orgasm denial and chastity devices aside, and give it a tentative try. She starts to prepare him for male chastity

After noticing some positive improvements in his overall day-to-day behavior, not to mention a spiced up sex life, she begins to actually see some serious potential with this male chastity thing.

She upgrades her initial concerns to…. “Hey, this could be a lot of fun. He’s much more attentive and nice to be around when craving an orgasm.”

But then the fun hits the fan.

The guy begins to feel deprived since he’s no longer getting off as often as he used to. He’s beginning to think this orgasm control gig is not his cup of tea after all.

Now the woman is legitimately frustrated. He wanted to play this weird chastity game and she decided to give it an honest effort. She was beginning to really like all of the benefits that this was bringing to the relationship….

And now he doesn’t want to play any more?

At this point it’s easy for any woman to throw her hands up in despair and give up. What went wrong here?

It is safe to say that male chastity will continue to be an exciting sexual fantasy for him. It’s not going anywhere!

But the guy usually becomes scared and frightened about the prospect of relinquishing control over something that he holds dear to his heart….his orgasms.

Male Chastity Was His Idea…. Wasn’t It?

The woman has been given a very brief glimpse into how male chastity could make her and relationship better…. maybe even outstanding!

There is no easy way to say this but…. it’s going to be up to the female half to make male chastity work.

The male needs the female to take his fantasy and turn it into reality. 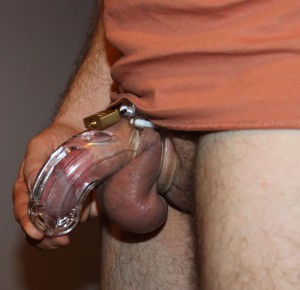 Let’s be completely truthful for a minute. The female species happens to hold much more power than society gives them credit for. So many men have opened up to the possibility of also being cuckolded by their wives or girlfriends.

Men are perceived as the stronger of the two sexes. They are usually physically stronger and many times earn more money than their female counterparts.

Although men are experts at putting up a convincing front, they understand that women hold the real power. They have ultimate control over the one thing that men want most…. sex.

Most women just aren’t aware of how to go about taking advantage of their ‘unfair advantage’ and use it to enhance their lives.

A satisfying and fulfilling male chastity lifestyle only happens when the woman decides to take complete control of the situation.

The majority of men are simply not mentally tough enough to be given much authority when it comes to implementing and managing a relationship predicated on male chastity.

The woman must step up in her highest heels and become the tough one here.

How to make all of this work so both partners are satisfied with this type of arrangement?

After he gets what he wants (sex) and has spent his sexual energy, he way too often goes back to his distant, complacent and less-than-attentive old self….

…. until he wants another orgasm that is.

A girl’s mission in life, if she so chooses to take this on, is to become adept at extending that loving and caring time frame for as long as possible while completely eliminating, as much as possible, the man’s disdainful
demeanor.

As many woman are beginning to find out, the best way to accomplish this mighty feat is by taking control of the male orgasm.

A smart woman is merely giving him what he’s craving and asking for already; why not give it to him?

How Can Male Chastity Benefit the Woman?

Many women associate the term ‘chastity’ with traditional female chastity, without often realising it has become so popular for men and can actually offer the women many benefits.    For starters, by controlling a man’s orgasms, a woman can free herself from the drudgery of housework, some of it…. or even ALL of it. Ejaculations can become conditional on him keeping the house clean on a regular basis. And that’s in addition to his regular chores. 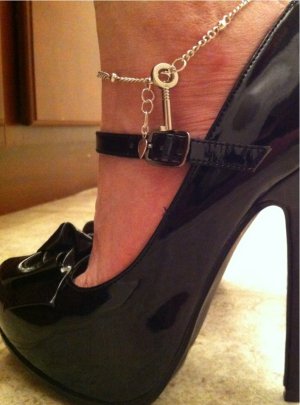 Adoration by the man of her dreams is a powerful dynamic for any woman. A denied man thinks about sex often and the object of his desire is the only one who can provide him with release. After all, she’s the one holding
the keys to his device.

The typical male masturbates more than he will ever admit. Ridding him of this habit is instantly achieved by incorporating male chastity. The only time he will be jerking himself off is for her entertainment.

When a woman denies a man of his orgasm, there is absolutely nothing he will not do for her. The female is only limited by her artful imagination.

How Does Male Chastity Benefit the Guy?

It’s difficult and more than a little scary for a guy to grant his woman full control over his sex life.

Although the male climax can be an awesome experience, the feeling afterwards can be terribly anti-climatic.

Something that most everyone agrees with is that the most powerful sex organ resides somewhere inside of our heads, not between our legs. Nothing is more intoxicating than the anticipatory feeling of impending sexual intimacy.

Males seem to be on a perpetual emotional roller coaster ride that crests at an intensely lustful high just before sex, that quickly spirals down to a neutralized (at best) state of mind that can sometimes border on disdain.

Turning control of his orgasms over to the woman of his dreams brings these unnecessary and capricious ups-and-downs to a screeching halt.

When the male is cleverly denied by an understanding, capable and emotionally strong woman, the anticipation of sex will always be there for him.

With time, the male mindset adjusts accordingly. For some men a complete reversal takes place; from how he can best satisfy himself, to how he is now free to fulfill her every want and need.

Ironically, achieving this mental state of sexual surrender can be the most satisfying emotion a man can attain.

For any guy who has ever wondered what it’s like to completely adore and cherish a woman, male chastity is the answer. He will come to find himself in an erotically stimulating state of peace and contentment that he never
knew existed.

Male chastity coupled with orgasm denial can take a man and woman to a place of romantic intimacy that is reserved for only a few select couples that have the courage to venture down this provocative path.