What Is A Chastity Cage

Chastity Cage
Chastity has been used in many cultures for generations, but the word chastity is prominently used in a different context today than it has been in the past. It is technically the sexual practice that coincides with the standards of an individual’s culture.

Since we have become more sexually liberated in modern society, chastity has become somewhat of a fetish for both gay and heterosexual people. Devices like chastity cages are used by dominant men and women to deny their male partner of sexual release.

A chastity cage is a device that fits around the penis to force the wearer to refrain from touching or gratifying themselves in any way. It is attached and generally locked with a padlock. The dominant partner is usually called the keyholder and will not open the chastity cage until they see fit. Some have been known to make their partners wear a chastity cage for a few hours while others are forced to wear them for years.

The time spent on the wearer varies and there are multiple advantages for wearing them for various periods of time.

One aspect of chastity cages that is attractive is the amount of pleasure that can be derived from orgasm denial. Many users have cited that being denied an orgasm can sometimes provide more pleasure than the orgasm itself. The orgasm is replaced with anticipation and excitement which provides the wearer with an intense physical and mental reaction that can often bring their ultimate gratification to new levels of intensity. 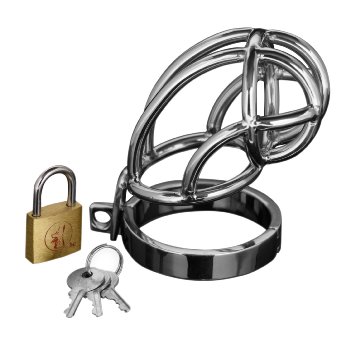 Another aspect of chastity cages that is attractive to partners is the humiliation and degradation that can be highly pleasurable. Many males like to be submissive with their partners and are turned on by the release of control.

When a man is wearing a chastity cage; he is in a constant state of needing and wanting which is often more titillating than a full release. The padlock on the chastity cage actually completes the fantasy of being locked away and taken out to play with when your partner is ready. This type of tease and denial has been known to reinvigorate sexual relationships and bring a new level of pleasure to your sexual practices.

A Day in the Life of a Chastity Maid
Submit A Story
Long Term Chastity
When Should You Lock Your Husband In Chastity?
0
3
0
0